There has been only one case I have actively participated in during the years and years that my mom, Ann House, has been searching and it came to me in a way that, at the time, seemed so ordinary – the new girl in high school sat in the only vacant seat in my history class my junior year, right behind me.

We immediately hit it off; inseparable, really. Among the many things we had in common adoption was a big one. I’m not adopted but my mom is and for as long as I can remember adoption has been a part of our every day life. My mom, with Sally File, started searching for her family before I was born and since then has reunited with countless biological family members. Because of this experience she has as also assisted thousands of adoptees, birth moms or fathers, and siblings fill that hole in their hearts that only someone close to adoption truly understands.

When my friend turned 18 my mom helped her officially start her search for her biological family. This came after years of her sneaking around in her adoptive parent’s library searching for the file that contained the information she wanted to know. We found a lot. Mostly legal documentation about the adoption but never really anything that would help her find her biological family. However, there is always that one piece of information you find that brings everything together, even if you don’t realize it yet, and for my friend it was that she was adopted out of an agency in Phoenix called Birth Hope.

In 2004 a Birth Hope caseworker told my friend she had found her birth mother. Her name is Michelle.  She explained that Michelle was 21 when she gave birth, a college student, blonde hair, blue eyes, tall and attractive. She could have been describing my friend had I not known they had never met. That’s the amazing thing about reunions – you always find someone who looks like you. Unfortunately, after describing Michelle to my friend the caseworker came to her point very quickly. She said her conversation with Michelle did not go well.

Michelle explained herself  through a stream of tears that the case worker later described in her notes as “uncontrollable and incessant crying”.  Michelle told the case worker she would be open to one phone call to “talk about everything” with my friend, but the phone never rang. Ever. Although my friend was never given any more information than that, it was clear that a reunion was not likely going to happen. This rejection was heavy, heartbreaking, and not how we all envisioned this going, especially my friend.

We tried, for 10 years, to look for Michelle using various spellings and a date which we thought was her birthday. We thought that we could narrow it down and somehow, by some miracle, find her. For anyone who has ever really needed to know something, or wanted something so badly you would do anything for it, 10 years is a very long time.

Every so often, though, we would feel a tug on our hearts to search some more which usually indicated to us that now might be the right time to find Michelle. Maybe now Michelle was ready, or maybe she finally told her family. We never really understood what the tug was but it was always strong. My mom calls this tug the silver threads that guide us in our search and I’ve learned over the years to listen to those threads because they usual lead you somewhere important. Not surprisingly, that all too familiar feeling came to us again 2 months ago.

My friend and I had been talking about Michelle and wondering if 10 years was a long enough wait to try searching again through the only means we knew – Birth Hope. I did a quick Google search for Birth Hope Agency in Phoenix only to find out they had been shut down by the State of Arizona in 2006 (2 short years after she originally spoke to the case worker).  To my amazement, the adoption files are now being held at the State Archive Library. I called and spoke to an Archivist and I could not believe what I heard,

“Yes ma’am. If you come in to the Library, and show proof of your State Confidential Intermediary Certification, we will allow you to access to view her file yourself and you can take notes of whatever information you need to help your search. It’s that simple.”

Three days ago, on May 23rd and with my certification in tow, I flew to Phoenix.

As I sat in that quiet library with my best friend’s birth history in front of me I couldn’t help but be very aware that as soon as I open this 28 year old file her life would be forever changed. And I was right.

The file was littered with documents – notes from the social worker dated 10 years ago, documents Michelle had filled out and signed, doctors visits, adoption paperwork, brief family medical history, birth dates, last names; the list goes on. It was everything I needed and more.  Not only were my mom and I able to find Michelle within 10 minutes of having the exact information we had been searching for, but we were also able to find 4 siblings and, as fate would have it, they all live approximately 4 hours from where my friend lives now. You see, 5 years ago my friend moved back to her home town because her heart was unsettled here in New Mexico. Something took her back to the San Francisco Bay Area and if you’ve ever asked her what it is she’s never been really sure. Her parents, mostly. But something else did too and I’m choosing to believe it was all leading up to this monumental week. She needed to be emotionally and spiritually ready to find this family, and she needed to be in the right part of the country to do so.

Like most adoption searches it’s never quite this simple. As we’ve found out, Michelle recently had open heart surgery and one of her daughters is graduating high school this week. As a result, my friend has decided to wait a couple months to contact them. Physical wounds need to heal and excitement about starting college needs to be allowed without the interruption of such an enormous surprise. Whats waiting a little longer after 10 years of waiting, wanting, and not knowing?

But that’s not all that makes this search and reunion unusual. My mom kept saying she could see, through her research, that there was another baby out there that wasn’t being accounted for in the way the other 4 siblings were. It was unclear, at first, how this baby was connected, especially since the age didn’t seem to match the other siblings we found a day earlier; but the baby was there, clear as day. An unknown baby born in April of 1987 to Michelle, in California, just 2 years after my friend was born. It didn’t take long and before I knew it my mom had put the puzzle pieces together.

“There’s another baby girl! Michelle gave a second child up for adoption! “

We were all astounded. Could it be?  The stream of group text messages that flew between the 3 of us were rapid and full of excitement. We never knew there was a second child given up for adoption. This was incredible! Then, through the bright screen of my iPhone, came a name and a phone number. Jessica. My best friend has a little sister named Jessica.

I honestly can’t believe Jessica didn’t hang up on me. As soon as I verified that she was indeed the now grown baby girl I was looking for my emotions took over and I started crying. I explained to her the last 10 years of searching for Michelle and how we had just found the whole family the day before. Jessica explained to me that she, too, had searched for Michelle 2 years ago and Michelle never responded. I laughed. I told her I was sorry she had the same experience we did 10 years prior but that I could give her the next best thing: my dear friend. Her big sister. And so I did.

The two of them quickly began talking and, as technology provides us, found each other on Facebook. Facebook – the magical reunion source for immediate gratification.

In the moments of the Facebook connection, I happened to be skyping with my friend as she opened up Jessica’s profile for the first time. Through the tears and laughter came the greatest, most rewarding, moment of the last 10 years. Recognition. 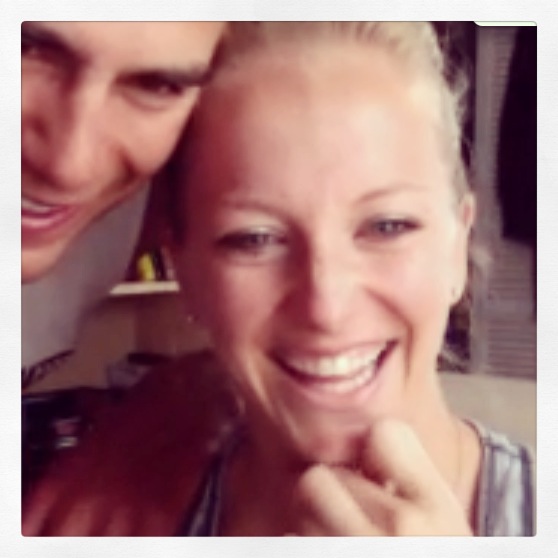 That very instant, I took this screen shot photo of my friend, with her boyfriend by her side, as she gazed at Jessica for the first time. The magic of my friend recognizing herself in someone else is an indescribable feeling that I will never forget and I am so honored to have been a part of it. This 10 year journey has led her to this moment.

There, in the screens of our computers, was this beautiful young woman in her wedding dress and airplane headphones. She resembles my friend so closely there was no doubt in anyone’s mind that they are sisters.

They have the same eyes.

They have the  same nose.

They have the same hair.

They have the same smile.

They have the same glowing skin.

And now, most importantly, they have each other.